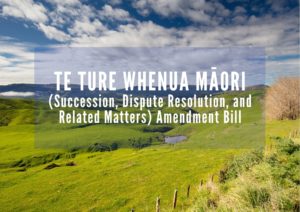 Alienation of Māori land: Right of first refusal for sale or gift of Māori freehold land

Jurisdiction in respect of injunctions

Grounds for removal of a trustee, member of the committee of management of a Māori incorporation

Use and occupation of whenua

Operation of the Māori Land Court